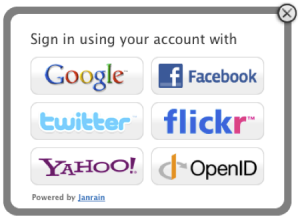 Social logins can be very helpful, and can enhance the user experience of an app if used correctly. By integrating social media, app developers can ensure increased user engagement, with the use of their app publicised on the user’s social media channels. This can be good for developers and advertisers, and it can be a useful feature for users too, enabling them to share more and more easily. But are social logins always a good thing?

In a study by Janrain,  Consumer Perceptions of Social Login, it was revealed that 52% of users already use social login and 65% of users are more likely to return to websites which welcome them via social login. If the same can be said of apps, it would imply that many people feel the benefits of logging in via social media , it is quick and easy, and means you can use your social media profile to sign up to all of your chosen apps.

Facebook, the most common social media platform which people use as a login,  revealed that 600,000 of its 1 billion utilise the mobile version of the social network. However, only 200,000 of the 1.6 million apps available on iOS and Android utilise Facebook as a means of logging in.

It was also revealed that people are 75% more likely to make a purchase or leave a review based on what their friends say about it, and this word of mouth community activity is no faster or easier than on social media, especially if it is integrated into the product. Additionally, connected users are shown to spend more money in-app, and the retention of users on social media is far greater. So why are social logins not more widely used?

Let’s think about it as a user first, and a developer second.

Would you like to sign in using your social media account? Many people simply want to access the content of an app and don’t want to be part of a social community based on that fact alone , at least not until they have grown to love the product. Logging in using social media leads to a sense of identification with the product which a user simply might not want yet, if at all. Social logins where sign up is unnecessary in the first place only prevents users from getting to the content they’d like to try out, and could put them off.

As a developer, this is something which must be put up with. It is far better for users to engage with your product in their own time and in their own terms. This way, you will get a more accurate reading of your user base and of your truly loyal customers, who are going to be of the most value to you in the long term. If sign-up is necessary, as it sometimes is, social login can be quicker and easier for users, but some people would prefer to keep their social media channels and app discovery, use and reviews separate. Bear that in mind when you are considering user experience during the app design. The divide will be different for each product, so make sure you tailor your decision to your user base.

A user will ask themselves “Why do I need to log in?” If they  aren’t  benefiting  from it, they won’t do it. If you are asking them to log in because it will improve your database of useful information, without offering something in return, such as unlocked content or a discount, they will feel a little suspicious. Will this flood my newsfeed with notifications? The same question is asked at the same stage in a normal sign-up form. Will this result in spam emails? Will I regret this? Even if it is a minor inconvenience, it is enough to put a user off. When asked to sign-in using a social media account, the user experience is fragmented and only a fraction will take the decision to stick with it.

As a developer, you have to recognise the fact that users won’t do things they don’t like. If social logins disrupt the user experience of your app, get rid of it. The users will appreciate it, more will stick with you and you will see greater benefits in the long run. In the short term, you might see fewer downloads, but the drop-out rate of users will be lower and you will have a more loyal set of users.

Social logins aim at preventing “password fatigue” , the exhaustion of having to remember and enter passwords for each account on each website and app you use. By consolidating all of the logins using your social media account, you do indeed avoid password fatigue, but at the potential cost of security. As a developer, you also have to hand over responsibility of user’s information to a third party. This might be easier, but sometimes it just isn’t right. Is it worth it? 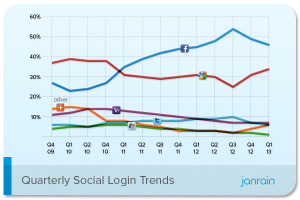 Another headache for developers is the sheer number of social media channels which it would be possible to use for logging in. Do you offer only one, potentially alienating customers? Do you offer them all, opening things up to the possibility that a user will log in with Facebook the first time, and Twitter the second? Won’t your customers be confused? You’ll be adding so many decision points to the log in screen that the users will dream of the good old-fashioned sign-up form. It might appear to be a good idea on paper, but will the  experience reflect the numbers? Additionally, these trends change. As this graph shows, people may change their minds about which social media platform they wish to use to login. Will they be able to change which one they log in with, whilst keeping the same account?

According to the Consumer Perceptions of Social Login study, 95% of people have given up when signing up to something. 80% of people who completed the form would do so with some false information. This shows us that people are frustrated by signing in and would prefer to keep some distance between their real lives and how they use apps and websites.