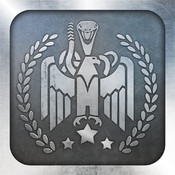 NarcoGuerra is a strategy based turn-by-turn app from independent developers of political gaming apps, Game The News.  Fans of ‘Risk’ will be familiar with this concept, you are presented with a map (Mexico) divided up into separate areas and you’re tasked with taking control of each area, one by one.  The storyline for the game is solving the ongoing 41 year war on drugs, sounds simple right?  Well anyone who’s ever watched Breaking Bad will know – it’s really not.

In story mode you play as the police to try and regain control over different areas of Mexico, taking down different cartels in an effort to eradicate the drugs hold over the area.  The gameplay is split into two phases, the support phase and the attack phase.  During the support phase you get the chance to move around your units, buy new ones and deal with the corruption of the existing units.  Then during the attack phase you decide which areas you want to attack and with how many units, a dice is rolled to determine the outcome of each attack and whether or not you regain control of the area.

It sounds like a fairly simple political game, but they do throw in a clever money element to 1. Make it more realistic and 2. Make it impossible to win.  Every action you make during the game will cost you, and money is always tight.  The cartels will try and bribe your units to corrupt them and get them off side, you need to run regular internal investigations to try and counter this – which again, costs money.  The message here is clear – the real war on drugs is complicated, expensive and there isn’t enough money to win it.  This is a game however and it’s actually unwinnable as far as I can tell, which does take away from the user enjoyment quite a bit.  As well as a story mode, there is a multiplayer option where you and your friends play as different cartels trying to take control of Mexico, passing the phone around in a circle.  Because no one is playing as the police in multiplayer, there is no bias against anyone and it feels much more like a fun, modernised version of Risk.

Overall NarcoGuerra is a clever app, its a nice refresh of a classic strategy board game to play with your friends, but it’s still a political game.  It’s a shame the story mode is so difficult, but if you fancy a challenge then do give it a go, it may just be that my video game playing skills are lacking in recent years.

Just as a side note

The developers, Game The News, only release politically charged games based around current events and news stories. With other titles such as

As good as it is for someone to be tackling political issues and bringing them to peoples attention in a new way that will hopefully start to interest children in politics, it does seem that a lot of their games suffer on the gameplay so the slightly oversimplified message can be pushed in your face.