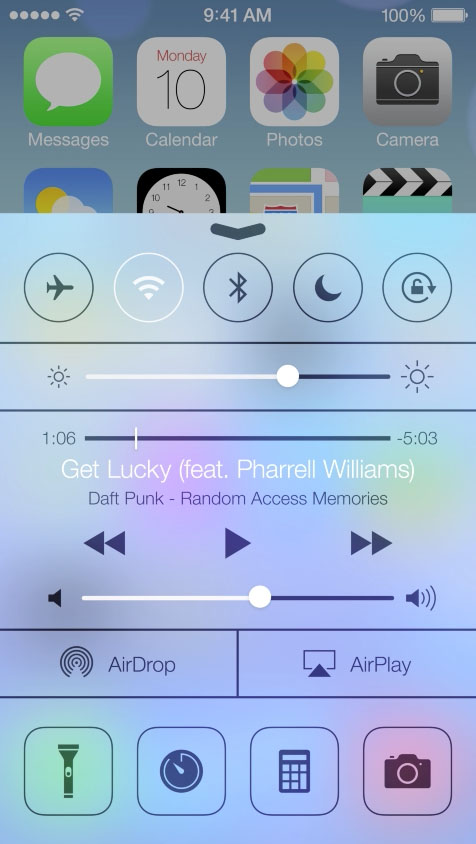 Last week was Apple’s annual Worldwide Developers Conference (WWDC).  The event was a highly anticipated affair as big changes were expected. Jony Ive has had a good chance to rework all of Apple’s software into his own style.  Gone is the old skeuomorphism which split opinion significantly in previous versions of iOS –  the faux pool table effect of the games center background and the news stand which looked like a bookshelf (which never really made any sense anyway). On top of the design changes that have come in with iOS 7, a whole plethora of new features and apps  are being introduced.  Here are the iOS 7 features we found the most interesting.

AirDrop – iOS devices can now share files peer-to-peer through a combination of WI-FI and Bluetooth.  The launch of this was compared heavily Android’s ‘Beam’ function which relies on near field communication.  With AirDrop, you just need to select which people you would like to share your files with in the room and hit share.  It was introduced to Mac with OS X Lion and presumably you will be able to share files between iOS and OS X using it.

Control Center – Swipe up at any screen, including the lock screen, to get access to your control center.  From this you’ll be able to turn on or off Airplane mode, Wi-Fi, Bluetooth, and Do Not Disturb. Lock your screen’s orientation or adjust its brightness. Play, pause, or skip a song. Connect to AirPlay-enabled devices, and quickly access your torch, timer, calculator, and camera.

Better Multitasking – iOS7 is going to provide better multitasking for apps, rather than exiting back to the home screen every time you want to switch between apps, you can now flick through them as they appear like tiles and if you want to close the app down just flick it up.  It’s very Windows phone, but it looks very well done at the same time.  Also Apple are promising that iOS 7 will learn your habits and prepare your apps ready for when you want to use them, presumably by doing things like refreshing your news feed before you open Facebook every morning.

Photo Updates – You’ll now be able to add filters to your photo’s before you take them and also take photo’s in square format. There are also big changes to the photo gallery, you can now view all of your photos onscreen at once, like a massive collage of colours. Photo’s can now also be organised into collections, making it easier to find a particular photo from a certain trip.  Photo streams can be created on the cloud, which can be shared with a group of people, all of which can add and save the photo’s as they choose.

Safari and ‘Keychain’ – Safari has been completely redesigned to make more content visible on screen at once, a new tab viewer has been introduced to make it easier to flick between the tabs you have open and see what you’re viewing on each page.  Keychain will remember all of your passwords to save having to enter passwords every time you need to log into different sites.  If you want it to, it will also generate a random password for you and store it (Although read my review of Zooz to see what concerns we have about automatic password entry).

iTunes Radio – Apples newly introduced music streaming service, users will be able to create their own radio stations by genre and stream music directly to their phone, If you subscribe to iMatch then it’s going to be advert free.  Apple have got plenty of experience in creating playlists for people off the back of their highly successful Genius feature in iTunes, so hopefully this is going to be just as good.

Those are just the features we found most interesting, others include

As well as many more.

This is a big update for Apple and I think everyone is happy with it.  The new design has split opinions quite strongly but I quite like it, iOS 6 is looking dated now and this is a very fresh approach to the design.  The collection of new iOS 7 apps will be enough to grab interest from anyone, even people who dismissed Apple before, and I think when it launches in autumn it’s going to be a big success.