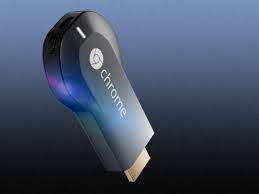 Last night Google help a surprise announcement with it’s head of Android hosting the event.  As far as everyone could tell (after a few handy leaks), it was going to be the launch of the Nexus 7 tablet with Android 4.3 as the operating system – which it was.  Google however, also announced their latest attempt to break into the TV market with a thumb sized device – Chromecast.  Here’s a look at the newest pieces of tech coming from the search giant.

This new Nexus 7 device is a welcomed update from the old device which launched about a year ago and to date has sold roughly 7 million units.  The main new features include

The device is going to be sold from $229 (Roughly £150) in the US and the UK launch will be in a few weeks.  This price brings it in line with Amazon’s Kindle Fire HD, much cheaper than the Apple iPad mini, however although Google may have made a better tablet than Apple, their biggest challenge now is going to be convincing people that they want to buy it.

Not a massive update on Android 4.2.2, although some notable features include

So not a great deal of big news unless you’re a game developer or planning on getting a pair of Google Glass in the future, but definitely worth a mention, considering how much attention everyone gave the launch of iOS 7

This was the surprise big announcement of the night, Google’s new Chromecast device will allow people to stream content from their phones and laptops directly onto a HDTV.  Chromecast plugs directly into the back of the TV through the HDMI port and will stream content over WIFI.  This is the latest push from Google into the TV market, after the disastrous attempt to launch Google TV and the Nexus Q in the past.  The device is the size of a USB memory stick and will cost $35 ( £23).

This looks like it will probably be the most successful attempt by Google to break into the TV market, however most people have already found a way around this problem by just having an extra HDMI cable that they plug into a laptop.  It will probably have more success in the boardroom than the living room though, as it allows multiple devices to be connected at the same time so sharing presentations will be made much easier during meetings.