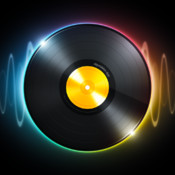 The original Djay app was launched three years ago and has become one of the most successful music apps in the world.  Apple have featured it in their adverts and millions of people have downloaded it worldwide, Steve Jobs even used it during a conference in 2011 to show off the ability of the iPad 2.  This month Djay 2 was launched and has instantly grabbed the world’s attention again.

Years ago, becoming a DJ was something out of reach of anyone with just a passing interest, you needed to have a impressive selection of vinyl and a collection of very expensive equipment.  As music became more affordable with the introduction of CD’s and digital downloads, it reduced one barrier to entry, but the expensive equipment still made it daunting.  The DJay apps aim to remove that barrier as well, by allowing people to use technology they already have (iPhones and iPads).

At first glance, Djay 2 looks very similar to it’s predecessor, you need to delve a bit deeper to see what new features have been included.  The first notable one is the HD waveforms, one tap of a button brings up coloured displays which allow you to see the different textures and layers of the song.  Pinch to zoom allows you to get as detailed as you like and it’s an incredibly helpful tool to see where to start and end transitions for both beginners and experts alike.

In the previous version of Djay, it could be quite tricky to get the beat of the two songs you were mixing to match up perfectly.  With this version, there’s a feature called ‘perfect sync’, it will automatically slow down or speed up the song you are mixing into to match the BPM and sync the two beats up for a seamless transition from one song into the next.  Finally there is a very powerful sampler built in to Djay 2, you can ‘slide’ one of your turntables away, allowing you to use one of three built in sample packs while playing.  It also lets you create samples from your library inside the app, then save them, name them and even export them into supported apps on your device.

The app is aimed at both beginners and professionals and is only available on iOS, the iPhone app is £1.99 (99p for the first 7 days) and the iPad version is £9.99 ( £4.99 for the first 7 days).  The only downside to the iPhone version is that the screen is a bit too small for it to really work properly, however the iPad is the perfect size.  It’s never going to replace a full set-up in a club to be honest, but for beginners who want to get to grips before splashing out on thousands of pounds worth of equipment it’s a great learning tool.