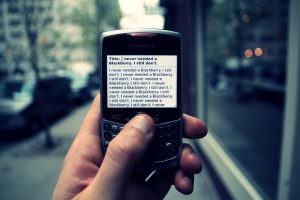 It was only in January that BlackBerry announced the latest incarnation of their software, BB10, which was meant to reignite the declining platform’s success. With new hardware to go along with the new OS, it was the moment chief executive Thorsten Heins hoped would be a turnaround for the company’s fortunes, but things have seemingly not worked out for the Canadian business. Yesterday, the company announced that it is seeking a sale.

In recent months, the BlackBerry platform has seen itself fall behind to the growing Windows platform, ailing in fourth place being Microsoft’s, Apple’s and Google’s mobile OS products. Having revolutionised the mobile handset market in the late 1990s and into the new millennium, BlackBerry was once the market leader but had their market share drastically reduced with the unveiling of the iPhone in 2007.

And now, with Android ever popular, Windows an increasingly trendy alternative and the iPhone   still seen as the most stylish mobile device, BlackBerry has come to be seen as the grandfather of mobile handsets. It would seem that the attempt to modernise the platform with BB10 was simply not enough to regain users who had flocked to competitors, and now BlackBerry must seek a sale or a strategic partnership in order to survive.

Timothy Dattels, chair of BlackBerry’s special committee established to investigate strategic alternative, said the company had been affected by ‘the evolving industry and competitive landscape’ and that now is right time to explore such options.

BB10 faced numerous delays before its release, with thousands of lay-offs at the company and a massive decline of shareholder wealth added to the mix. The company had hopes that their new product would help them survive, but the final product was not strong enough to weather the storm.

So what does this mean? Well, not really a lot at the moment. Confidence in the platform has certainly taken a knock, meaning even fewer people are likely to switch to BlackBerry. Nobody wants to board a sinking ship. But for the time being, existing users won’t see any change. If and when a buyer or a partner is found, there will inevitably be a shake up. The products as they are today are not doing well in the marketplace, so new blood will seek out a new direction.

It will likely be a drastic change. Small changes and updates have failed to deliver the brand from their troubles, so a radical overhaul will probably be at the forefront of a buyer’s mind. BlackBerry has to find a way of ridding itself of the “dinosaur” tag it has picked up, and surely only a huge change will be able to do that now.