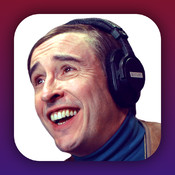 Apps being launched to promote a new film release isn’t a new thing by any stretch.  These promotional tools generally come in the form of a half baked game though, some kind of tag on to an existing game brand, think Temple Run: Brave.  To celebrate the launch of Alan Partridge: Alpha Papa however, Baby Cow Productions have launched Radio Alan: The Alan Partridge Player, which is the closest possible thing to an actual Alan Partridge radio show.

The app takes a lot of clips from the Mid Morning Matters show but also features a lot of new material from Steve Coogan’s character.  It works by importing songs from your iTunes library and playing sound bites between each one.  If you have anything in your library which matches up to songs from the original show, it will order it so the clip relates, for example if the app is about to play Seal, it’ll be introduced with a ‘Keep your clubs away from his young, it’s Seal!’.  Additional features include getting your iTunes library analysed by Alan so you can find out what he thinks of your musical taste.  If you get a poor score you can download Alan-approved songs directly onto your phone through the Partridge Playlist.

The app is 99p to download and you can pay an extra 99p for an additional Alan pack which features a selection of different quotes.  Additional content is promised to be in the pipeline but no word as to whether or not this will be included in either the initial download fee or the in app purchase.  At launch, the app did have some issues with a handful of people not having the correct introductions to their tracks, however these seem to have all been fixed in the first update.

It’s a really good app overall, possibly a little bit expensive at 99p for a film release tie-in with an extra 99p of in app purchases but for anyone who ever watched the original TV series and wants to hear Alan Partridge on the go, it’s essential.  In the future it would be nice if they could find a way for you to download the Alan Partridge audio book through the app, something that would certainly increase download figures for both.