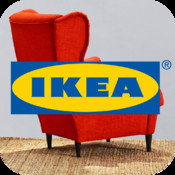 Almost everyone at some point in their life has had to put up a piece of IKEA furniture.  It’s a task that is usually far more complicated than it really should be, generally because if you’re anything like me – you don’t read the instructions first.  Usually you can sit back and be proud of your half-a-days handy work putting up a table, but occasionally it doesn’t quite look right in the room and you have to disassemble it and take it back.  The new IKEA app, although not making it easier to put up flat-pack, is going to ensure you get the right piece of furniture first time by placing it inside the room via Augmented Reality (AR).

The app accompanies the launch of their 2014 catalogue, which you download through the app along with any additional material as it’s released throughout the year.  You can flick through the whole catalogue on your phone and each page has a very neat interface which allows you to bring up each of the individual items, see their store number, dimensions and price.  You also get the option to share the item through Facebook, Twitter or e-mail if you wanted to suggest to someone else or get opinions of your potential new furniture.  Unfortunately you can’t reserve anything through the app at your local store, but this is something that should come in later versions.

The most impressive part of the app is the augmented reality function.  Unfortunately we didn’t have an IKEA catalogue in the office to try it out with but here is the promotional video for the app.  It requires you to have a physical copy of the 2014 catalogue, this acts as the trigger for the AR engine to bring up the piece of furniture and also works as the size guide, the app can work out the size of the furniture in the room compared to the size of the catalogue.  Currently there are only a total of 90 products which can be placed in the home, but this is guaranteed to grow throughout the year.

Overall it’s a really good app, the addition of more products will be greatly received, as would the ability to reserve items in your local store through the app.  It’s only on its first release though and it’s another really smart use for AR, exactly what we like to see.