New iPhones Unveiled – the 5S and 5C are Here 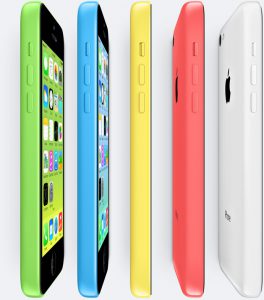 Apple unveiled the new devices which will coincide with the release of the new iOS version last night, with many of the rumours circulating beforehand confirmed to be true. Along with the fresh, flat design of the software, Apple’s devices are getting a slight facelift, with more colours available and a fingerprint sensor surrounding the home button. The event also saw Apple unveil a “more affordable” iPhone , the 5C , which isn’t as affordable as many commentators were hoping. The greatest additions to the new iPhones were undoubtedly an updated camera and that highly impressive fingerprint scanner.

With a retail price of £549 for the 16GB model, going up to £709 for the 64GB, the 5S is the new premium device. There is a lot of bang for your buck, with significant updates being unveiled. Aside from the fingerprint sensor and camera improvements, the new iPhone will come with an A7 chip, making it the first 64-bit smartphone. Apple claim this will make the device “twice as fast”. All of the standard apps have been optimised for this new chip, and app developers will be looking to capitalise on this new power when they start to build their first apps for the new device.

For the first time, new colours have been introduced. In addition to the “Space Grey” (Black) and White models, a gorgeous new Champagne gold and white edition will be available. It isn’t a huge departure from the regular colour scheme, but it is a significant addition.

Heralded before the announcement as a “more affordable” iPhone, it appears that the low price of the 5C was the only rumour that failed to materialise. Certainly, it is technically cheaper than the premium model, but not by much. Less expensive, yes. More affordable? It’s in the “expensive” band of products.

An A6 chip means that there is no 64-bit architecture in the 5C. The display is the same 4-inch Retina display, 1136×640 resolution found on the 5S and the camera is the same as in the premium version , with the only differences being the lack of true-tone flash, slightly smaller pixels and the inability to take stills whilst recording video in the cheaper device. Crucially, there is no fingerprint sensor here.

In a huge departure from the typical design of the iPhone, the 5C will come in a range of bright colours. Much like the Nokia Lumia range, the 5C will be available in Blue, Green, Yellow, White and Red. Interestingly, these are made of “hard-coated polycarbonate” , so, plastic. A range of silicon cases with cutouts will be available too, allowing you to dictate the “experience of colour”.

Let’s take a look at the models similar in terms of specs. The 16GB versions of both models are separated by £80. That £80 will buy fingerprint recognition, allowing you to unlock your phone and pay for purchases with your thumb. It will also see you benefit from the 64-bit architecture making the device “twice as fast”. The camera will be essentially the same, with only a few minor features missing. You’ll also be upgrading from plastic to the more sleek high-grade aluminium.

What you will lose is the “more fun, more colourful” image that comes with the choice of colours of the 5C.

The 5C has been labelled as “entry level”, but its price certainly doesn’t reflect that. For an entry level version of its premium sibling, they share a huge number of features. More could probably have been done to make the 5C properly “more affordable” , a more basic camera could suffice and “entry level” customers surely would be satisfied with something less than an A6 chip. But the truth is that the 5C is really Apple’s “entry to premium level” device.

The real entry level device is the 4S.

The 4S will only come as a £349 8GB model, with an 8MP camera, an A5 chip and a 3.5 inch screen. Those are really the only differences. More than £100 cheaper than the 16GB 5C, and half the price of the top-end 5S, the 4S has survived Apple’s clearout (the iPhone 5 will be discontinued). This new model came as a surprise to most, and could be Apple’s real “more affordable” iPhone. Geeks and fanboys with less cash to throw about will be happier at the new price point, but it’s still relatively high and it will get you the device that everyone got hold of 2 years ago. Not great for us in the UK or in the rest of Western Europe and North America, but it could prove lucrative where Apple are looking to expand most , China.

If you’re on a budget, the 4S is a good option, but it may still be unable to compete on price with devices such as the Windows Phone. If you have the cash, but want value for money, the 5S gives you the latest technology for only £80 more than what is increasingly looking like a product marketed at rich kids and yuppies. The 5C isn’t as “affordable” as was rumoured , it’s a slightly less expensive gateway to Apple’s premium products.