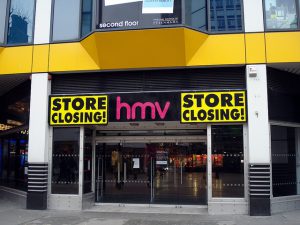 We did a blog post a few months ago about Apple’s, possibly unfair, removal of AppGratis from the App Store for allowing people to download apps outside of the App Store, taking away Apple’s 30% cut for all apps downloaded.  Since then, there have been no really high-profile cases of apps being removed from the App Store for violating Apple’s terms and conditions, until now.

British retailer HMV has had it’s app removed from the App Store for allowing people to download music through it, circumventing Apple’s iTunes store for downloading music.  The app was only approved to be launched a month before it was taken out of the store, so why did Apple pick on HMV when apps like Spotify and Amazon allow music to be played through them, and was it fair that it got taken down?

Well the big difference between the HMV app and Spotify is that Spotify only lets you stream music, you never actually own the songs that you listen to, unlike if you were to buy them through iTunes.  The Amazon app is slightly different again, it syncs with songs you have bought on other devices and lets you stream them to your device, it doesn’t actually let you buy any songs through the app.  Because HMV have released an app which actually lets people purchase the music they want to buy through the app and iTunes provides that exact same service, that’s where the problem has arisen.

So was it fair that Apple removed the HMV app from the app store?  Apparently not, according to the UK’s Entertainment Retailers Association who have issued a statement, saying that the removal of HMV from the app store raises “serious issues of competition in the digital entertainment world”.  Because iTunes has such a dominant position in the world of digital downloads (about a 70% estimated market share), Apple’s removal of any service which allows customers to download music outside of it’s own platform is preventing competitors from reaching the millions of people that use Apple devices.

My personal opinion on this is still divided, Apple obviously need to protect their own revenue streams, iTunes is a big earner for them so by allowing other apps onto it’s own platform, they will start to lose a considerable amount of profit.  However their stronghold over all Apple devices is stopping anyone from competing with them on a highly popular platform which is likely to have serious implication on innovation in the tech sector.