iBeacons Rolled Out in Macy’s 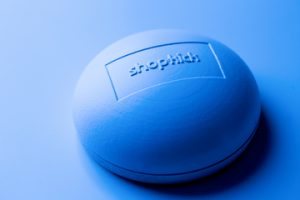 Earlier this year at Apple’s Worldwide Developers Conference (WWDC), Apple quite quietly launched iBeacons (alongside iOS 7)  a low energy bluetooth device which is tipped to revolutionise location based technology.  The technology which is used inside iBeacons is the same as ‘Tile‘ but rather than helping you to find things you have lost, iBeacons are designed to stay static and find your phone.  This week they’ve been rolled out by shopping app ‘shopkick’ in  Macy’s Manhattan and San Francisco department stores for a trial run.

For anyone not familiar with shopkick, it’s a shopping app which provides its users with rewards for browsing for products, scanning products they are interested in and generally doing anything shopping related through the app (you can see a full run through of what shopkick does here).

The idea behind integrating iBeacons (or shopBeacons as shopkick have called them) into Macy’s is so that people can browse for products through the app, like them then when they visit Macy’s the iBeacons will pick up their location and send them notifications when they are near those products.  Once the trial at Macy’s is over shopkick plan to make the shopBeacons available to their other retail partners for about $40 a device.

What does this mean for everyone else though, although this is quite an exciting new feature to be released, currently it’s only being used for marketing purposes in two department stores in America.

There are the obvious benefits for all sorts of location based marketing. Say Starbucks adopts the technology, every time someone walks past one of their stores they could be prompted with an offer of 10% off a cup of coffee by showing their phone in store.  Sports stadiums could also adopt the technology so that every person who walks through the gates would be prompted to download the clubs app, giving teams a new way to engage their audience.

The most exciting possibility for the iBeacon though (going back to shopping) is the possibility of contactless payments.  Near Field Communication (NFC) has never really taken off in this respect, both due to mass infrastructure changes required in stores, problems with the technology itself and Apple’s refusal to adopt the system.  iBeacons though could pave the way for truly contactless payments, unlike NFC which would require people to still queue up to make their payment at the till; iBeacon technology would allow people to make purchases from anywhere in the store from their phone.

It’s safe to say that at the moment, this is just quite a nice marketing tool; but by the end of 2014 I can see iBeacons being a massively important piece of technology, integrated in many ways into our everyday lives.