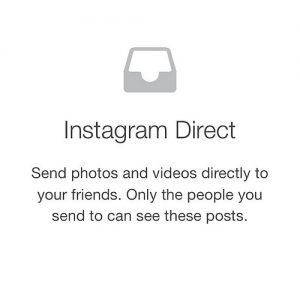 Yesterday afternoon, photo sharing social network Instagram announced that it was introducing direct messaging into its app with the launch of the latest version, 5.0.  The new service allows you to send photo and video directly to up to 15 followers at once, without them being publicly visible.  The news comes less than a month after Facebook (the owners of Instagram) reportedly made an offer of 3 billion dollars for picture messaging service Snapchat.  So why the sudden rush to allow people to send each other messages directly?

The most simplistic and obvious answer would be to generate more users.  It’s a business model that has become more prevalent in recent years – get users first and work out how to monetise them later.  Worldwide, Facebook has more than 1.1 billion users, Instagram (only) has 150 million and instant messaging application WhatsApp has over 350 million.  These figures make Snapchat’s 8 million seem like a drop in the ocean, however if Facebook puts a value of 3 billion dollars on them, they obviously see a potentially untapped revenue stream in direct messaging.

One thing Instagram haven’t commented on is whether or not they will use this instant messaging service to push adverts into peoples accounts.  It would be the most obvious way to make money from this new feature, users wouldn’t have to be following brands on Instagram for them to get their message across.  It’s may seem like an excellent new idea, but it’s essentially just re-purposing direct email marketing with some images and fancy filters, rather than a plain text sales pitch.

As someone who uses Instagram quite often, I’m not too sure how I feel about this update.  Just like after Twitter released Vine, Instagram announced video, and now that Facebook’s offer at Snapchat got turned down, Instagram announce messaging.  It seems like Instagram is a service that everyone is really happy with, but doesn’t want to be left behind.  Nothing pioneering has been released by Instagram, they are just updating to make sure that they keep up with the competition.

If you want to see the Instagram Direct launch video, take a look here