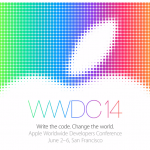 It’s that time of the year again,  Apple’s Worldwide Developer Conference (WWDC) takes place in San Francisco next week.  One of the biggest events of the year in the technology world, WWDC is where Apple traditionally releases the latest iteration of iOS, along with any other software it’s been working on over the last 12 months.  Last year we saw the launch of iOS 7, and while this year it’s almost certain we won’t see such an overhaul for mobile again, here’s a look at what you might expect to see.

As I mentioned, the launch of iOS 7 last year was such a massive overhaul to the design of iOS, it’s unlikely we’ll see anything so major this year.  From the look of it however we can expect to see some quite exciting new apps.  The rumor mill has been churning out details of a Healthbook app constantly, this will supposedly connect with the rumored iWatch and measure a user’s heart rate, along with other vital stats to keep a track of fitness levels during exercise.

The other major update is a supposed complete overhaul of Apple Maps to include more accurate locations and public transport information, this is sure to be a welcomed change after the backlash from users when iOS 6 removed Google Maps from devices.  Other big updates include some OS X apps being moved across to iOS, things like Textedit and Preview look to be coming to mobile, possibly making it easier to share files between your mac and your phone.

No one is entirely certain what it will be called, OS X 10.10 sounds just a bit too clunky for something Apple would happily release, but we’re almost certain to see a launch of a new Mac operating system.

Unlike the minor updates we’re expecting to see with iOS 8, the new OS X is rumored to be completely redesigned to a more flat style.  As far as rumors go though, that’s about all anyone has to go on; Apple have done a sterling job of keeping everything they have planned under wraps before launching the new OSX so we can only imagine what they have planned.  Some analysts have speculated though that we could see Siri make an appearance and also the ability to Airdrop between desktop and mobile, something I can imagine is backed up by the rumors of Textedit and Preview on iOS

WWDC 2014 is next week, so by the end of the week we’ll have another update of what actually happened there.  If just some of these rumors are true though, there’s some really exciting stuff to come.