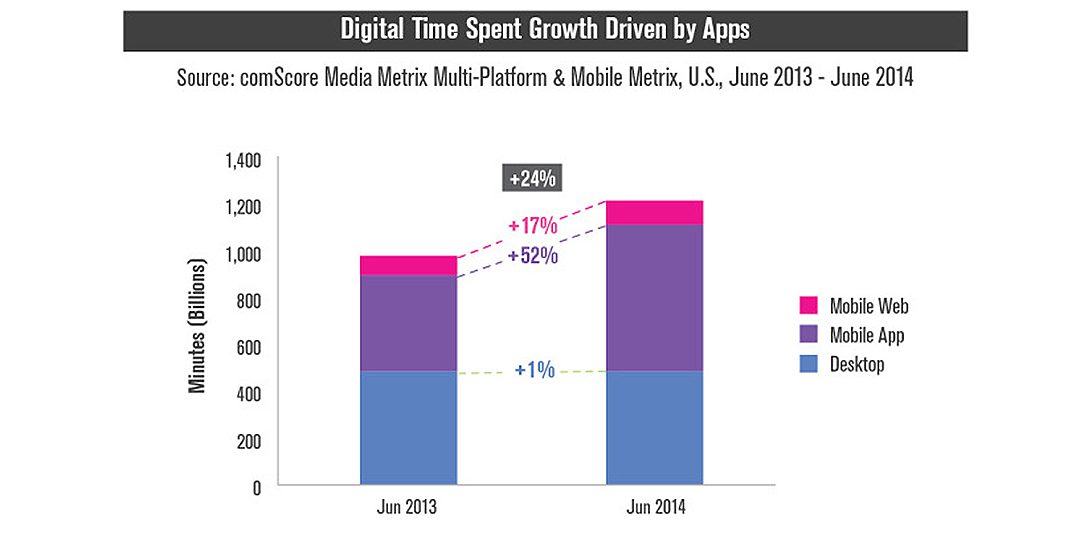 It’s something we’ve talked about for a while now – how important is it to get an app developed for your brand / business.  We did a blog while ago about apps being more popular than the mobile web, in which we found that consumers spend 86% of their time on a mobile device within native applications, the remaining 14% of time being spent in mobile browsers.  Yesterday, a new report was published by analytics firm comScore bolstering our findings from earlier in the year.

The report looks at consumption of digital media as a whole, rather than just time spent on mobile devices.  It starts off by revealing that 52% of our total digital media consumption is through native mobile apps, with an additional 8% through the mobile web and the remaining 40% through desktops.  That means, almost two thirds of all digital media is now consumed through a mobile device, with 7 out of 8 minutes being spent in native apps over mobile browsers.

The report goes on to show just how engaged with applications the general consumer is, stating that over one third will download at least one application a month, with the average smartphone user downloading three apps every month.  More than half of consumers (57%) will use apps every single day and 79% will use them nearly every day, or at least more than 26 days of the month.

Almost unsurprisingly, Facebook is still the most used app amongst all demographics.  Social networking, games and radio apps contribute to nearly half the total time spent on apps, giving you a good idea that mobile usage is heavily concentrated on entertainment and communication.

It also drew some interesting comparisons between iOS and Android users, with iOS users spending more time in news, radio, photos, social networking, and weather apps; while Android users spent more time in Google Search and Gmail.  The report continued to compare iOS with Android, showing that iOS users have a 40% higher median income (how they worked this out, I’m unsure) and on average spend more time engaging with applications (9 more hours per month)

If you want to read about this in more detail, you can download the full whitepaper here.

Overall it’s safe to say though, digital media traffic is steadily shifting from desktop to mobile, and mobile traffic is, firmly, set in native apps over the mobile web.