Our Process for Building MyPlanner 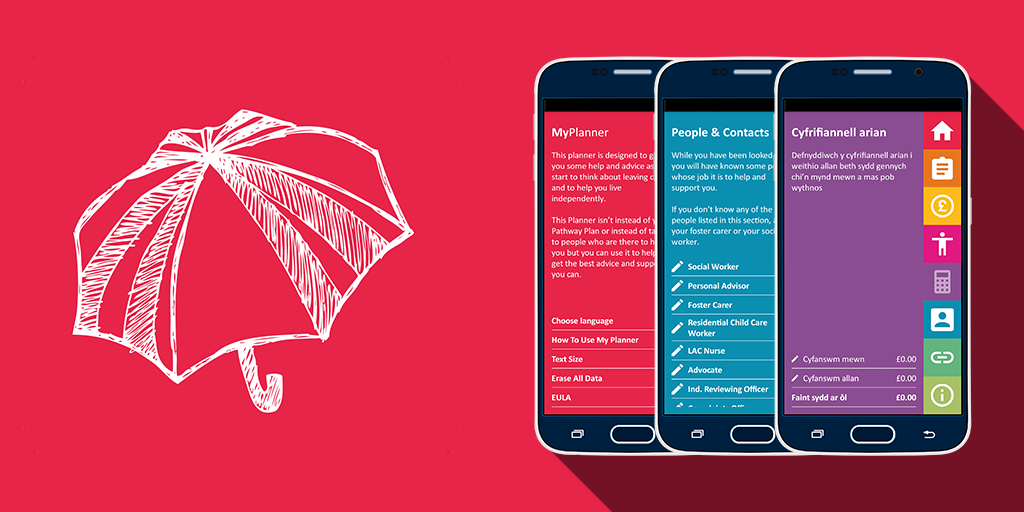 At the start of the summer, we were approached by the Children’s Commissioner for Wales and to develop their first mobile application; MyPlanner.

My Planner is a document given to young people who are leaving care as a tool to prepare them for life of independence; quite a long document, full of helpful information. We knew that the product we delivered would have to be just as helpful in addition to displaying the content in a more succinct, digestible manner.

Originally, the idea we had for MyPlanner was a digital book style application; something that would replicate much of the original content and utilise the original artwork from the physical document. Once we drilled down into the content however, we found this wouldn’t work quite how we wanted it to and needed to think of a different plan on how to present the content.

The idea we settled on was this: An icon menu running up the right hand side of the screen with each icon linking to a different section of content within the app. Each icon would take the user to a main menu, which would have at most one sub menu, before delivering the content which the user was looking for. This easy to navigate system is the most appropriate for this type of application, allowing people to easily switch between different sections of content. The other major advantage of this icon menu was the bi-lingual provision of the application – no additional consideration was required when designing the menu to allow for menu options in both English and Welsh. 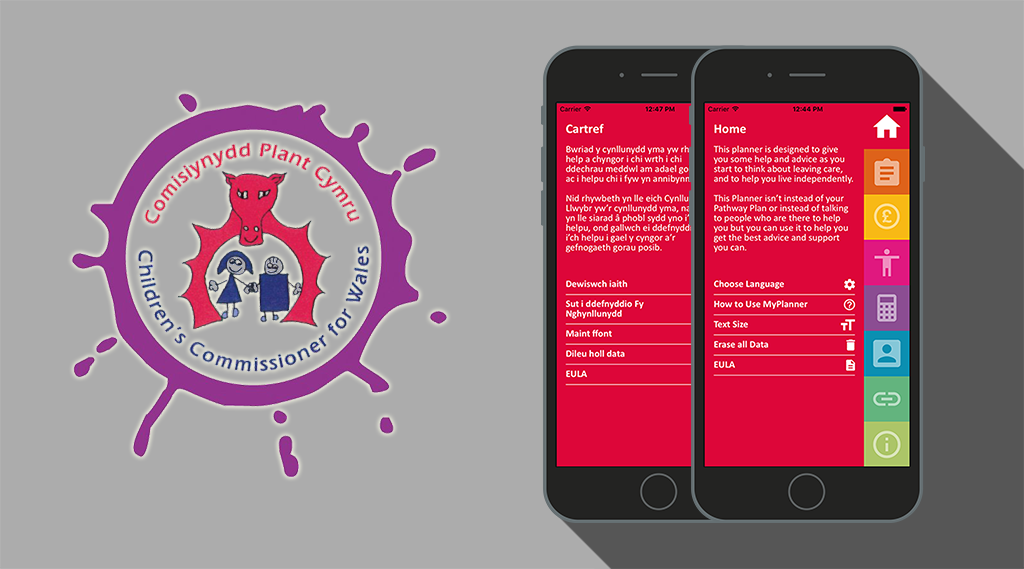 This covered the Rights and Support, Money and About sections of the application. Next we needed to look at the Independent Living Skills section. The Digital Manager at the Children’s Commissioner wanted to regularly update the application with recipes and information on the best way to keep a house clean. For this, a simple CMS was developed that allowed the application to regularly be updated and the information stored locally in an SQLite database. Once the structure of this CMS had been finalised, we also decided that controlling the Useful Links from the same CMS would be the most efficient way to manage the app’s content from the client’s side. Although the information in the useful links was less likely to change , it was very important that additional links could be added and existing links could be changed.

Next it was time to look at the Budget Calculator; a tool to help people work out how much money they would have left at the end of each week or month after all of their income and outgoings had been calculated. While the original layout of this screen was ok, it wasn’t perfect and this didn’t become apparent until we loaded a trial version onto our devices in house and tried it out. Little things like not making it clear how to edit the amounts in and out, and that closing the entry box would automatically save your entry weren’t made clear. Once we’d done a trial run, it was back to the drawing board (quite literally) to tweak the UI slightly, making it clearer for anyone using the app how to amend any of the content within the budget calculator. 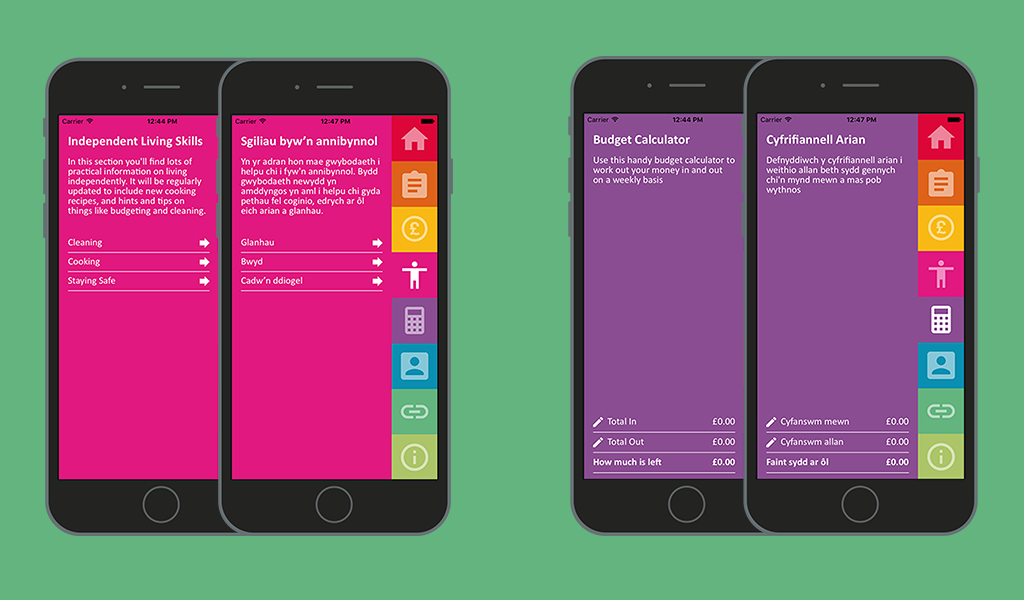 A similar process to the Budget Calculator was undertaken when designing the People section. The original My Planner document had a section for entering useful contacts, some of which were quite specific to people leaving care. We wanted to re-produce this within the app to keep specific care related contacts separate from a care leaver’s day-to-day contacts. This was built into the app under the People header, giving users the opportunity to add all of their contacts in one section. What we didn’t do was give people a way to call directly from this screen and instead had placed it two levels down within the Useful Links section! A phone icon was added to the end of the row within the People section to give people the option to call directly out from this screen. 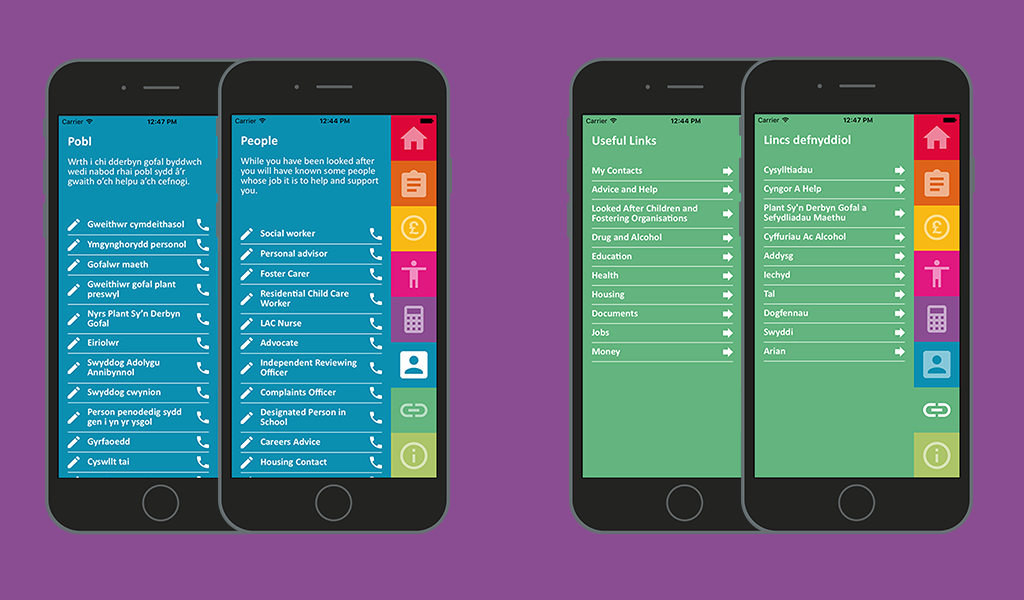 This completed all of the sections of the app, successfully turning the paper My Planner document into an easy to use and intuitive smartphone guide for young people leaving care. It was sent to the client for approval and they came back with only the smallest of amends, generally text errors. We produced app store artwork and the app was submitted to both the iOS and Google Play stores.

MyPlanner is one of the publications of which we’re most proud; not just because of its smart UI and delightful UX, but because it’s an application which will provide real world help to people who need it.

If you’d like to have a chat about our app building process, the Children’s Commissioner for Wales and MyPlanner or just how we like our cups of tea, drop an email to [email protected] and Alex will get back in touch with you.